Capturing the Majesty of the Bald Eagle

We are excited to begin season #4 here at Eagle Country! As most of you are aware, our last season brought many surprising turns of events. Most significant was that Nic and Vic, our resident eagles, did not return to the nest. We were all surprised and we miss them with you! While we have no surety of their fate or whereabouts, we simply trust that they are alive and well on their adventures elsewhere.

However, what did happen last season was that there were many visiting eagles as well as some territorial disputes. After extended and numerous visitations by not only mature eagles but also juveniles, we even started calling last season our “EC Bed and Breakfast Season!” However, after several weeks, it became clear that there would not be a settled pair.

We are thrilled that Abby chose Blaze and most importantly, they have two offspring this season, Fetn & Thunder!

Above all, we are glad you are here! The coffee has not stopped perking here at EC, so pull up a chair, grab your cup and enjoy with us! 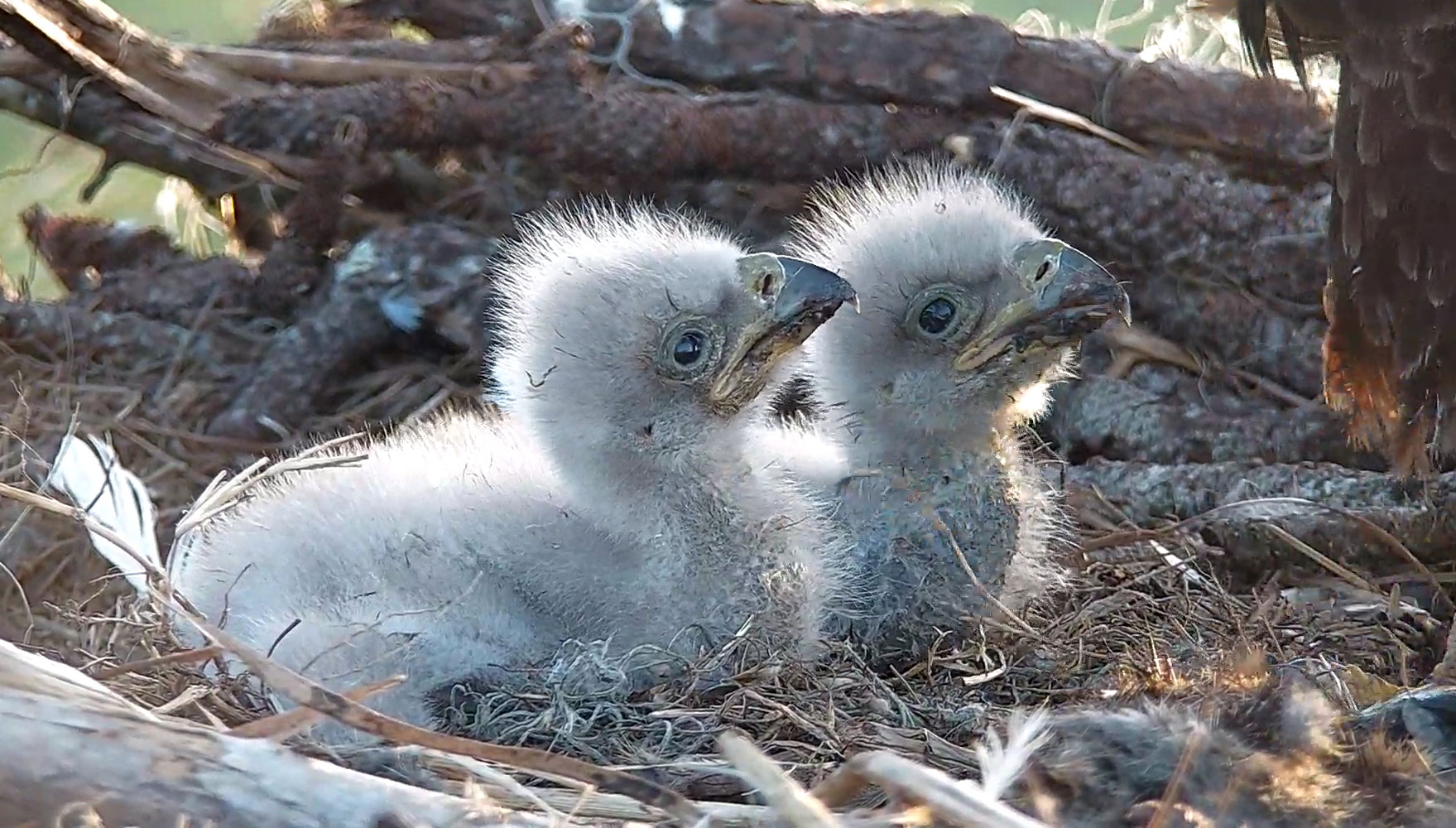 We receive many questions about the eagles, the history of the nest and on-camera sights and sounds. Many of these questions we have tried to answer below.

When did EC eagle cams start?

Eagle Country eagle cams started in 2018. Eagles have been in the area for many, many years and after Hurricane Irma, we decided to share them with viewers after witnessing their resilience in rebuilding!

What happened to the remote cam tree?

The remote cam tree was hit by lightning just a few days after we finished our maintenance. Just a couple days after that, it turned brown. Although we’ll miss seeing the green, we’re hopeful that it will become a great snag tree!

What happened to Victoria & Nicholas?

The 2020-2021 season brought many unexpected turns of events. We believe we had a sighting of Nicholas prior to cams going live, but we are not certain. We believe we may have seen Victoria early on, but again, we are not certain. All we do know is that they did not return for the nesting season. Although we don’t know their fate or whereabouts, we like to think they are simply enjoying their adventures elsewhere!

If you were fond of Vic & Nic and would like to revisit their story, you can read about and view them here: Vic & Nic

Who are the resident eagles?

Great question! In the 2020-2021 season, Nic & Vic did not return to the nest for unknown reasons. In their absence, a nesting pair did not emerge from the many suitors and territorial disputes. Therefore, we currently (at the start of 2021-2022 season) do not have a confirmed pair. We’re watching with you to see what may happen!

Am I hearing gunshots?

This nest located in the country on private property and is also a working ranch. Because it is in the country, sound really travels. While the shots may seem loud and close on cam, they are not. Also, the shots do not pose a threat to the eagles.

Why am I seeing so many mosquitos and bugs?

This nest is located near very swampy areas of Florida. Along with swamp conditions comes times of dense mosquitos and various bugs in the air. It is not uncommon to have a short period of time in the evenings (often 15-20ish minutes) of a sort of “swarm” of mosquitos. After this, although not swarm-like, the air is still thick with flying insects. The eagles are used to it and although they shift, scratch and “wave away” much like we would, they have learned how to deal with them.

Can the eagles see the IR lights at night?

The eagles cannot see the IR light at night because it is invisible to them. In fact, if you were to stand under the tree at night, it would be completely dark outside!

Where is this nest located?

This eagle’s nest is located on private property, which is also a small working cattle ranch, near a large state park in southwest Florida. Eagle Country is made up of a small group of people who love God, love His people and love eagles. The ranch has been in the family for generations and the nest has been on the property for around 20 years.

Find a variety of gear from t-shirts to mousepads! Support Victoria & Nicholas and help spread the word of Eagle Country!